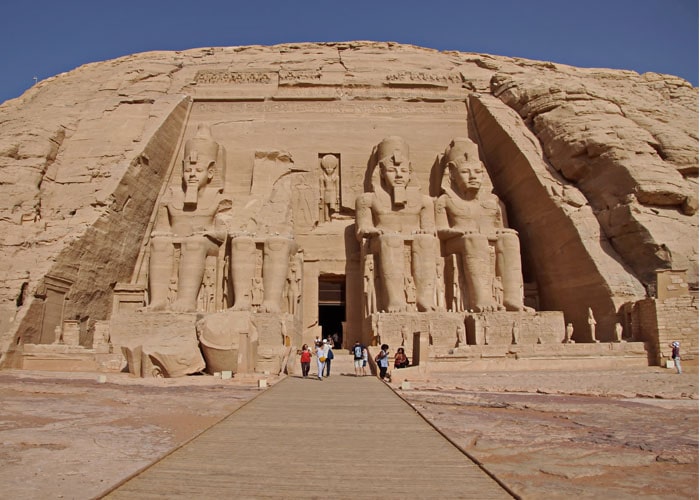 The Temple of Abu Simbel redefines the definition of words like Glory. It was miraculously built by Ramses II (1279-1213 BC) during the time of the new empire of Egypt to immortalize his legacy, honor his wife Nefertari, and protect his legacy from oblivion.

He began building it in 1264 B.C. until 1244 B.C. On the western bank of the Nile River west of Aswan, it was carved into the mountain to teach the strength and culture of Egypt to the southern neighbors or anyone who wants to attack Egypt’s borders.

The Construction of the Temple of Abu Simbel

The temple consists of two temples, the first temple is the great temple of Pharaoh Ramses the Great for the honor of the gods as Amun, Ptah, and Ra-Hor-Akhty and as the commemoration of his victory at the Battle of Kadesh in 1274 BC.

Inside the temple, three consecutive rooms extend 56 meters to the end of the temple where there are 4 statues; a statue for each god, decorated with statues of Ramses the Second, images and scenes with the gods and their victory in the battle of Kadesh.

Festival of the Sun of the Temple of Abu Simbel

The temple enjoys wide media attention during the festival of the sun held on February 22nd and October each year when the sun’s rays enter the temple to illuminate the temple’s sanctuary and the faces of the gods directly to the northeast.

At a distance of 100 meters is the temple of Nefertari, which was dedicated to the goddess Hator (goddess of love, joy, and beauty), containing two statues measuring 10.5 meters high for Nefertari and six statues for her husband King Ramses the Second.

Saving the Temples of Abu Simbel

In the ’60s of the last century, the whole complex was in danger of being submerged under the water of Lake Naser as the Temple of Philae because of the construction of the High Dam of Aswan but thanks to UNESCO the complex was relocated to a new location, using a brilliant plan in one of the challenges of archaeological engineering in history.

Tours to the Temple of Abu Simbel

The Temple of Abu Simbel is one of the most historical attractions around the world where many tourists dream of exploring it, so if you want to visit this magnificent monument, and the other archaeological sites you can visit our vacation packages to Egypt or Egypt Nile Cruises and choose the trip that best suits you to Egypt.