Why should you visit Egypt?

Egypt “the land of pharaohs” with its great civilization attracts many people from all over the world. Egypt is not only a historical country there are also many beautiful places like the Red Sea and the Nile River.

1-The Great History of Egypt

-The Nile River is considered the key to Egypt’s civilization. Life is concentrated around the Nile because of its fertile territory.

-The three Giza Pyramids of the Egyptian kings Cheops (Jufu), Kefren (Jafra), and Mincerinos (Menkaura) are the most important pyramids of Egypt. They are built as tombs and have some chambers.

-The Great Pyramid of Cheops is considered the most important and one of seven wonders of the ancient world that was built in the IV dynasty.

–Alexandria was the ancient capital of Egypt. Alexander the Great “the king of Macedonia” founded Alexandria in 331 BC. It is famous for its Library that has thousands of books.

-Modern Egypt was founded in 1953 and has a great history that distinguishes it from other countries.

The land of the pharaohs for their great pharaohs who were the cause of establishing this great history from their first dynasty to establishing modern Egypt with its wonderful cities. 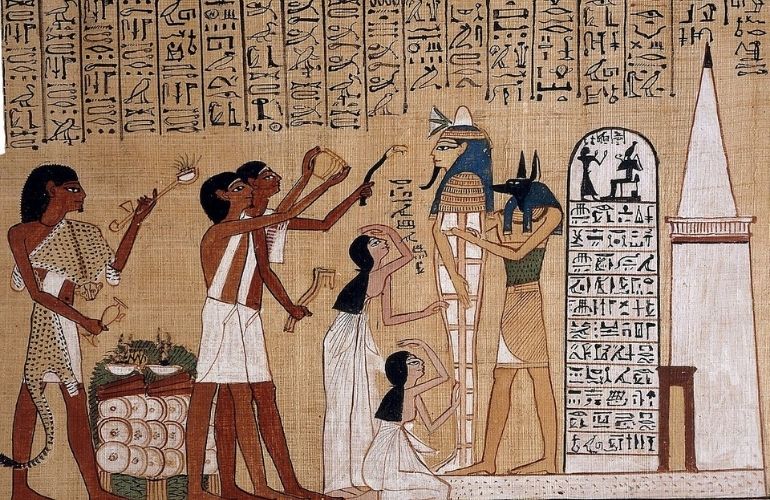 3-The Great Construction of Ancient Egypt

4-The Inventions of the Ancient Egyptians

The Pharaohs invented many things to help them in building their tombs and temples and for their afterlife, they were still inexperienced. They were famous for their knowledge in astronomy, geometry, mathematics, architecture, conditioned roads, medicine, orthopedics, condoms, papyrus paper, and many others.

5-The Mummification in ancient Egypt

Ancient Egyptians believed in eternity after death, so they mummified their bodies to preserve them. The process and techniques of mummification:

-After two days of a death, embalmers wash the body of the dead well.

-Also remove the brain by a metal instrument through the nose only leaving the heart because they believed that there is the organ of feeling and consciousness.

-Covering the body with natron so as not to decompose and filling it with slime or sawdust and this stage takes almost 35 or 40 days.

-Then these days wrap the body with linen bandages.

6-The Temperate Climate in Egypt

The climate in Egypt is dry and sunny in the summer and moderate in the winter and sometimes rainy. The best time to travel to Egypt is in early spring, autumn, and winter from October to April. The summer is sometimes pleasant in the coastal cities of the Red Sea. [ read a full article about the climate in Egypt during the year ]

7-The Attractive and Historical Places

1-The Places in Cairo

Cairo is the capital of Egypt that stands out with its mosques, museums, and churches. The mosques in Cairo are much like the Mosque of Al-Azhar, the Mosque of Ibn Tulun with its large courtyard, the Mosque of Amr Ibn Alas, the Mosque of Muhammad Ali which is considered the crown of the Citadel of Saladin, and many others.

Coptic Cairo has points of interest such as the Hanging Church or the Church of Santa Maria which refers to Egyptian Orthodox and the Church of St. Simon’s Cave. There is also the Egyptian Museum which contains ancient and historical treasures and objects. Khan El Khalili or Jan el-Jalili is considered a great market and famous in Cairo.

2-The Places in Giza

3-The Places in Alexandria

Alexandria was the capital of ancient Egypt and is now considered the second capital of the country. It is famous for its Library which has many books and the Citadel of Quaitbay which is a 15th-century fortress.

4-Places in Luxor and Aswan

5-The Beauty of the Red Sea

The Red Sea cities with their beautiful landscapes attract many people, such as Hurghada, Sharm el-Sheikh, El Gouna, and Marsa Alam. Hurgada is famous for its desert. Generally in the Red Sea cities, you can do many water sports like diving and snorkeling and see the colorful types of fish in the Red Sea.

Egyptians always help others and are at the side of those who need help. They are nice and hospitable people. Like any country, Egypt has people of all levels but all are kind to others. They respect their customs and traditions and you are also interested in knowing the cultures of other countries.

7-Cruise on the Nile between Luxor and Aswan

This Nile cruise allows you to learn more about Egyptian civilization by visiting many temples such as the Temples of Luxor, the Temple of Edfu, the Temple of Kom Ombo, the attractions of Aswan, and many others.

Complete the answer Why Egypt is worth a visit?

There are many attractions in Egypt so pack your bags and visit Cairo, Aswan, Luxor, the Giza Complex, and the coastal cities by booking one of our Egypt travel packages.

Explore another world at night and enjoy the Egyptian songs and dance when you drink your best drinks. You can also buy gifts from the Khan el-Jalili bazaar. Don’t miss the opportunity to take a trip to Egypt.