Giza Pyramids Complex: No monument on the planet that can reflect the true definition of the word Gloria “the majestic Pyramid Giza Complex“. The complex contains the last intact monument of the seven wonders of the ancient world “The Great Pyramid of Giza” next to two other pyramids, each one is impressive in its unique way and represents a political level and economic stability.

The Complex is one of the last intact prehistoric monuments on the planet that was built in the time of the ancient empire (2686- 2181 B.C.) during the 4th dynasty (2613-2493) more than 4000 years ago and is still able to capture the heart and soul of everything you see.

It contains three pyramids of Cheops, Chephren, and Menkaure who wished to examine time and immortalize their names and legacies throughout the ages. Each pharaoh built a pyramid to be his final resting place and help his soul ascend to the heavens.

Next to the pyramids is the Temple of the Valley where kings and queens were mummified and prepared to pass to the other side. The Complex is located in the western desert, 9 kilometers west of the Nile River. 13 kilometers southwest of the center of the city of Cairo. The Complex is protected by the only guardian of Egypt “The Great Sphinx“. 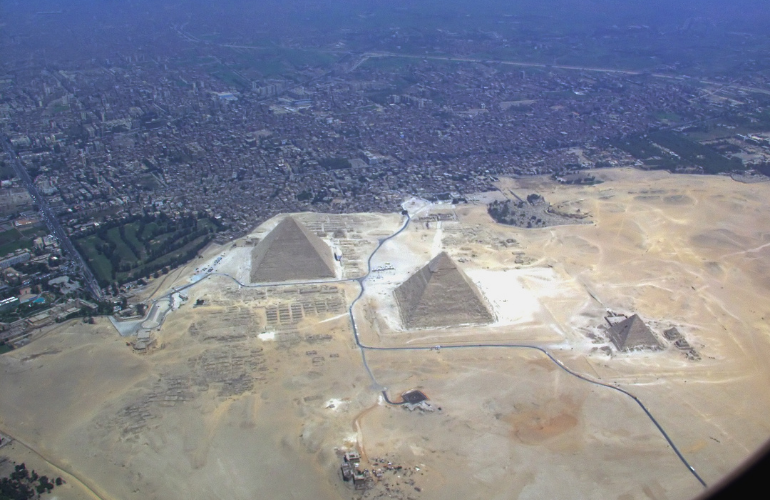 What you will find in the Giza pyramids complex?

The last untouched wonder of the ancient world is the Great Pyramid. It was built for King Khufu, at the time of the ancient empire between 2580 and 2560 B.C., it took 20 years to build it.

Known by the Greeks as King Cheops. It was the tallest structure in the world measuring 147 meters high (481 feet) for over 3800 years until the construction of Lincoln’s Cathedral in 1311. It was built with 2.3 million blocks of limestone, each block weighing 2.5 tons, by 10,000 skilled workers. 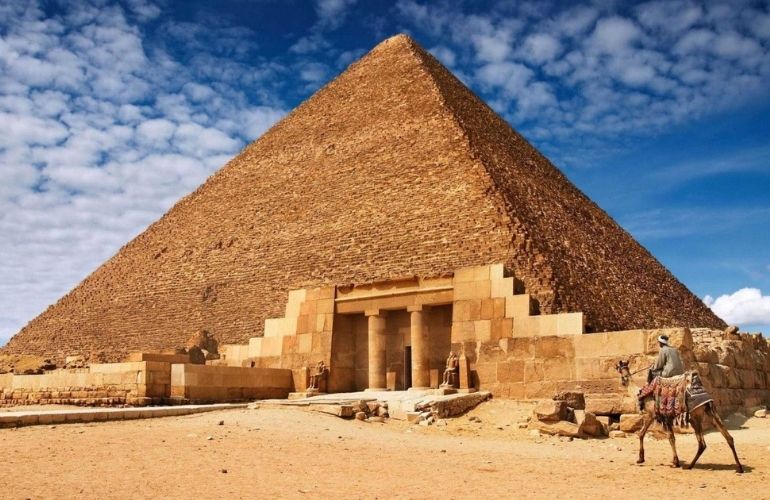 The Pyramid of King Chephren (Khafre)

The second-largest pyramid in Egypt, built by the order of King Khafre (2558-2532 BC). During the 4th Dynasty, in the year 2540 B.C. Jafra is the son of Jufu, so he wished to create a similar structure to his father’s. The pyramid is known by the Greeks as Chephren. It measures 136.4 high (448 feet) on a base of 215.5 meters (706 feet) and was also built of limestone and has an angle of 51 50 24. In front of the Pyramid is the protector of Egypt’s famous “Sphinx”, the oldest statue in the world that was designed with the face of Pharaoh Jafra. 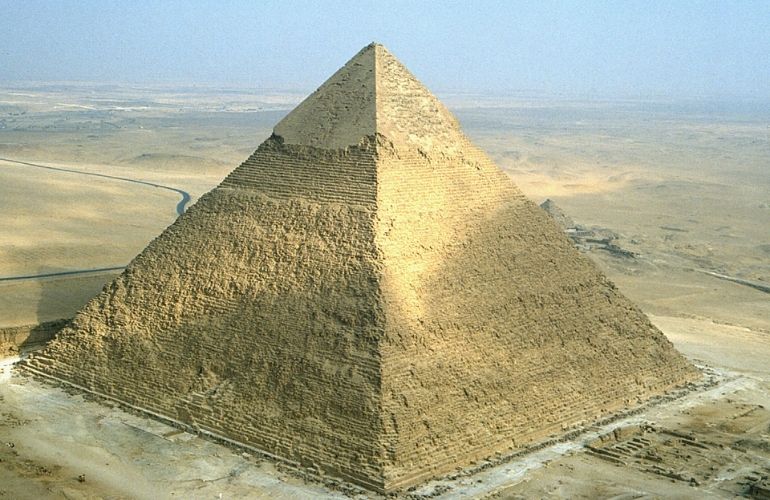 The Pyramid of King Mykerinos (Menkaure):

The smallest of the three pyramids. It was built by the order of King Menkaure (the sixth king of the IV dynasty) in the year 2510 before Christ to be his tomb. It was built of limestone from the outside and granite stone from the inside, it is 61 meters high (204 feet) on top of a base measures 108.5 meters, and has an angle of 51 20 25. The interior of the pyramid is built of granite. 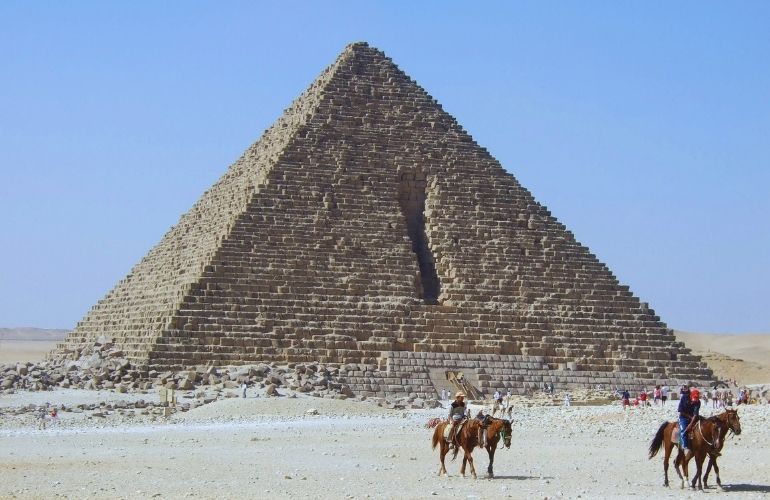 The ancient Egyptians built the sphinxes as symbols of strength and intelligence that’s why it was important to build the sphinxes with a lion’s body and a human head that represents the power and strength of the King. In Pharaonic belief, the lion is a symbol of strength and guardian, so you can find it on their amulets, furniture, and doors of temples. The most famous sphinx is the Great Sphinx of Giza. The Great Sphinx is the oldest and largest in the world. Many mysteries are surrounding the time of its construction and the lack of its nose.

Read about [ Ancient Egyptian Symbols and its meanings ]

Explore the History of Egyptian Civilization

The history of Egypt is filled with fascinating history so do not miss the opportunity to witness and discover the hidden world of the Pyramid Complex of Giza. Check out our Egypt travel packages and Nile cruises to enjoy the journey of life to the land of the pharaohs.