Lovers of indecipherable mysteries will be pleased to know more facts about the Pyramids of Giza that remain as hidden as ever. These massive historical monuments were built in an ancient period, yet they are still highly perfect. But if we think about it, several ancient monuments share this perfection. The Great Pyramid of Giza is the most famous and curious one, which requires knowing these amazing facts about it.

1- Pyramids of Egypt, the legacy of the Pharaohs

The Pyramids of Egypt were the funerary monuments of the great pharaohs. A legacy that continues to arouse admiration. Undoubtedly, the best known are the Pyramids of Giza. This triad of pyramids are the tombs of the pharaohs Cheops, Kefren, and Mycerinos, who intended to achieve immortality with these impressive monuments, and in a way, they succeeded.

Khufu facts: The Great Pyramid houses Cheops “Khufu “tomb. It is the only one of the Seven Wonders of the ancient world still standing. Its infinite blocks of stone are superimposed, one on top of the other, to raise its 146 meters towards the immaculate blue sky of Egypt, proclaiming the glory of its creator. 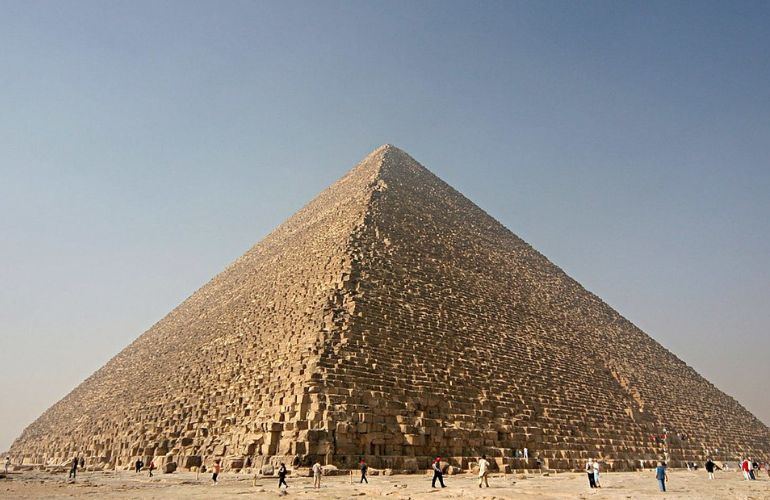 Khafre pyramid facts: Next to it is its little one, the pyramid of Chephren “Khafr, ” built by this pharaoh, son of Cheops. Located on the higher ground gives the impression that its size is greater than that of Cheops, so for some time, the name Great Pyramid was given. However, it’s 143 meters. 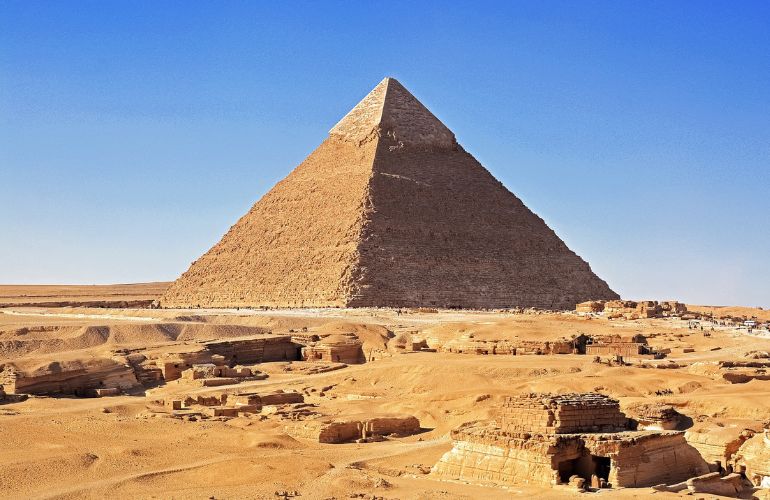 Menkaure facts: Finally, the smallest of the Egyptian Pyramids is the one dedicated to the pharaoh Mycerinos”Menkaure,” which was covered with pink marble in ancient times. Although it is “only” 65 meters high, it is often nicknamed the “divine pyramid.”. Around it are the pyramids of the queens and small constructions dedicated to housing the tombs of the consorts of these pharaohs. 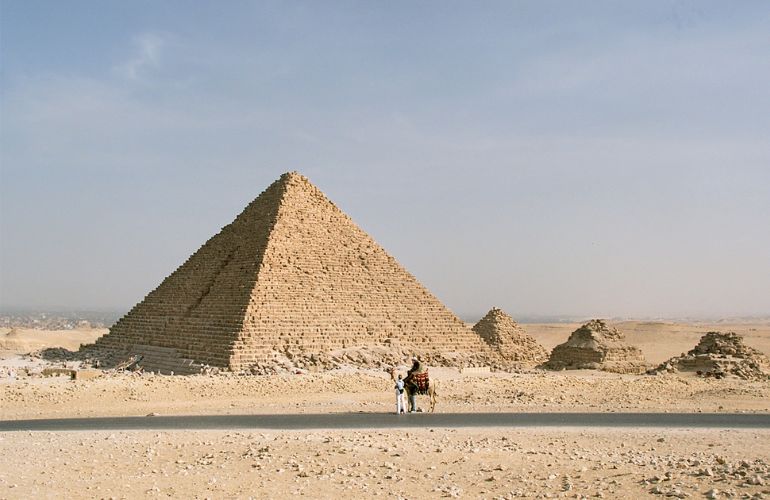 2- The Pyramids Of Giza Are Not Three

3- The Pyramids  Of Giza Are Perfectly Aligned

You only have to step on the Giza Plateau to realize that the pyramids of Cheops, Chephren, and Mycerinus are not placed in any way but are perfectly aligned. The ancient Egyptians were very spiritual beings who believed that the stars of Orion were associated with Osiris, the protective god of the departed in the afterlife. That is why the three pyramids are aligned with this constellation so that Osiris protects the three great pharaohs.

4- Enslaved people did not build the Pyramids Of Giza

This information came to light thanks to some writings about the workers’ schedules. In them, it could be seen that the workers had a break at noon to eat, something that,t in case of being slaves,s they would not have.

In addition, it is said that the skeletons of some workers of the pyramids were found and that they had near the body vessels that they used to eat and drink while they worked in the construction of the pyramids, things that were not allowed for enslaved people. The discovery would demonstrate this, made public in 2010, of a series of workers’ tombs next to the pyramids themselves, something that, according to the Egyptian archaeologists who found them, would never have been possible if they had been enslaved.

5- The Pyramids Of Giza Are Not The Only Ones In Egypt.

Don’t miss visiting the complex of pyramids during your trip from Pyramids Giza, Saqqara, and Dahshur – Cairo Layover Tou. r

6- The Great Pyramid Measures Less Than When It Was Built.

Back in 2570 BC, the Pyramid of Cheops measured 146 meters when it was built. Due to the wearing away of the limestone facing that covered the entire surface of the pyramid and the theft of some stone blocks from the top, today,y the Great Pyramid measures 138 meters.

7- The Pyramids Of Keops Is a Puzzle Of Million Of Pieces.

It is estimated that no less than 2,500,000 stone blocks were used to construct the Pyramid of Cheops. And don’t think that’s a small amount, no, no. Each stone blocks at the base of the pyramid weigh approximately 17 tons,s and those at the top weigh about 2 tons each.

8- One piece Every Two And A Half minutes

It is estimated that the construction of the Great Pyramid of Cheops lasted between 20 and 30 years. Scientists have calculated that if this estimate is correct and considering that 2.5 million stone blocks were used, a partnership should have been placed approximately every two and a half minutes.

9- The Sphinx guards the Pyramids.

The three pyramids of Giza are guarded by the Great Sphinx, a monumental sculpture 20 meters high and 70 meters long. It is believed that this giant statue, with the head of a human and the body of a lion, could represent Kefren, but there is no proof of this. Besides, it is located right in front of the Pyramid of Chephren. Could it be a coincidence?

10- The Pyramid Of Keops Is Used As a cLock.

Looking at the Cheops Pyramid, you can tell what time it is in Egypt. Or so they say. The shadows on the Great Pyramid are supposed to indicate the exact time, the solstices, and the equinoxes. We haven’t seen it, but anything is possible coming from the ancient Egyptians. Everyone knows that the ancient Egyptians had superior science knowledge and that astrology was one of the things they were best at, so we don’t think it’s a coincidence that you can see the time on the Great Pyramid.

11- The Construction Of The Pyramids Remains A Great Mystery.

How the blocks of stone were transported from the quarry and piled up to build the pyramids would undoubtedly be one of the greatest curiosities about the Pyramids of Giza. But it is not yet known.

Some experts’ theories indicate that the ancient Egyptians could have used wooden or bronze levers to lift the blocks and had hydraulic systems to moisten the sand and transport the blocks more easily from the quarry. But in reality, none of these theories have been proven so far, so 4600 years later, the construction of the pyramids remains a mystery.

12- The Location Of The Pyramids On The West Bank Of The Nile Is No Accident.

12 Interesting facts about the pyramids of Giza for kids

The pyramids of Giza represent one of the most outstanding architectural achievements of the ancient world. Every year, Egyptologists discover new details and secrets of these engineering marvels. The pyramid complex at Giza has attracted visitors from around the world for centuries, and children who study ancient Egypt’s mysteries can’t help but associate the pyramids with the great pharaohs.

Planning to visit Egypt with your kids?! So don’t miss checking out our Egypt Family Tours!