Anubis Egyptian Dog God is considered the god of death and is one of the most powerful deities in Ancient Egyptian Symbols. Ancient texts refer to him as the god of mummification, embalming, the cemetery, tombs, the afterlife, and the underworld. Archaeologists identified the African golden wolf as the sacred animal of Anubis. Their roles changed in different contexts. Thus, we can note that the First Dynasty described it as a protector of tombs. Later, the ancient Egyptians also recognized it as an embalmer. Anubis is the god of death, mummification, and the protector of the tombs. He is represented with a jackal head and black skin.

Egyptian mythology is one of the most complete we can find, so the gods of Egypt occupied a central role in the life of this ancient civilization to such an extent that the rituals we know today from this culture, such as the case of mummification, stemmed from the desire to keep the body intact for the afterlife, which they would enjoy in the afterlife with the gods.

The Symbolism of Anubis “Egyptian God with dog head” 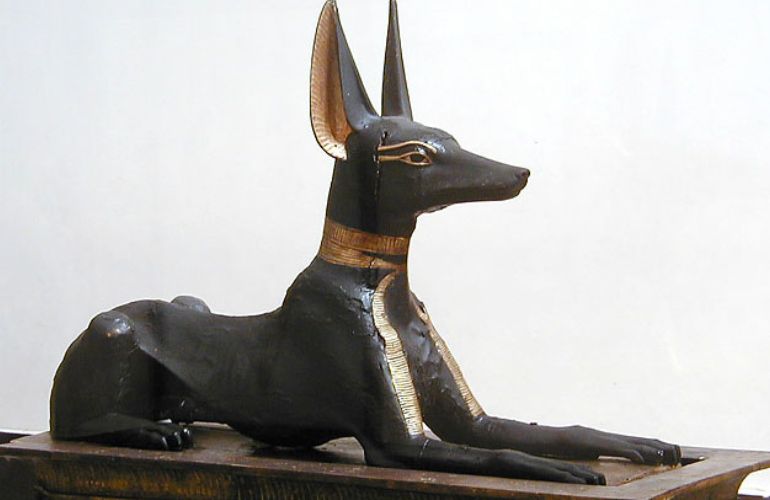 Anubis could be represented in animal form or in mixed form (with the body of a man and the head of an animal) and was among the most important deities of ancient Egypt. The animal that symbolized Anubis has been identified variously as a wild dog, an Egyptian wolf, or, more traditionally, as a jackal, but it is actually impossible to say with certainty what species he belonged to because of the physical characteristics that distinguish him belong somewhat to all three species. It seems, however, that the Egyptians had no interest in specifying its nature precisely, and studies conducted on mummies found in necropolises of animals sacred to Anubis have revealed a mixture of various canine species.

Moreover, the black color that characterizes it has no reference whatsoever to the physical reality of the animal but falls within the symbology of colors. Black is for us the color of night and death, but in Egypt, it was above all that of regeneration and rebirth

Usually, ancient Egyptians History depicted the god in a seated position in black. Another famous quality of Anubis, the Egyptian dog god was the ability to change shape. From the Old Kingdom, Anubis became the most important god of the dead. Later, the era of Roman paintings showed him holding the hand of the dead to guide them to Osiris.

The origins of the Egyptian Dog God “Anubis”

Initially, Anubis was the most powerful son of Ra, the sun god, who later became powerful in the underworld, being the preeminent deity of the early Egyptian dynasties. Previously, Anubis Egyptian dog god had been considered the son of Ra and Hesat (Associated with Hathor), but after being assimilated into the Osiris myth, he was considered to be the son of Osiris and his sister-in-law Nephthys. He is the Egyptian deity who first appears on tomb walls and was first invoked to ask for protection from the dead, and often appears caring for the corpse of the king, presiding over mummification rites and funerals, or standing next to Osiris, Thoth, or other gods while the heart of the soul was weighed in the Hall of Truth in the afterlife. 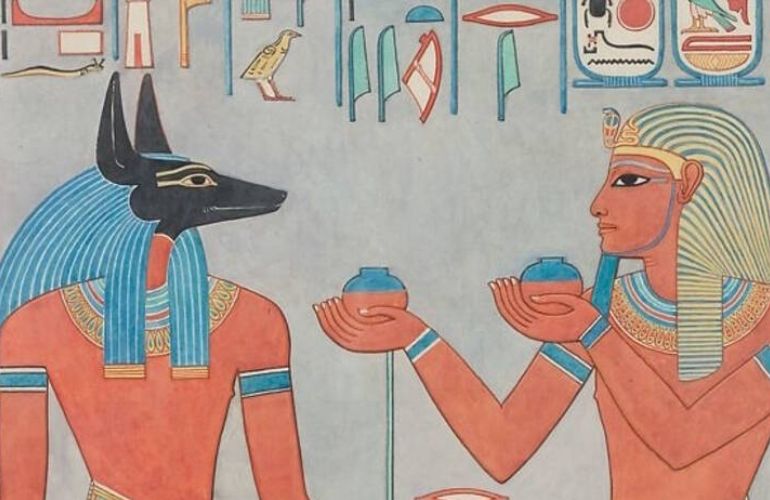 A popular image of Anubis is that of a man standing or kneeling, with the head of a jackal, holding the golden balance on which the heart of the deceased was weighed against the pen of truth. His daughter is Qebehut (or Kabechet), who brings fresh water to the souls of the dead in the Hall of Truth and consoles the newly deceased. Anubis’ association with Nephthys, known as the “Friend of the Dead,” and Qebehut emphasizes his enduring role as protector of the dead and guide to the souls in the afterlife.

Where does the name Anubis come from?

He is currently known as Anubis “Egyptian dog god”, however, this is only the Greek deformation of his real name Inpu in Egyptian or Anoub in Coptic. His origin, however, is still surrounded by shadows and it is not clear why he was named this way, although one of the explanations is that it is an onomatopoeia of the howl emitted by jackals. Some of the translations of hieroglyphs suggest that Anubis had several epithets and names that referred to him.

Epithets and names of the Egyptian dog god of Anubis.

Anubis and the weighing of the heart

Only after the body had been mummified and placed inside the sarcophagus and the tomb closed and sealed did the soul’s journey to the afterlife begins. It was a journey fraught with dangers and trials to overcome, for going to the afterlife was not an easy thing and one had to earn it. The Egyptians were among the first peoples to think that after death the deeds done in life stand before the deceased like a mountain: impossible to erase them, impossible to make them go unnoticed. The last test the soul faced was the most important and final one because, if it was not passed, the dead person would be denied access to the afterlife of the blessed and would instead find himself in a place of eternal damnation, a kind of hell.

The trial was actually an actual process that took place in heaven and was called “weighing of the heart”: the Greeks called it “psychostasia,” weighing of the soul. The soul of the deceased was led by the god of death Anubis by the hand inside a hall, called the hall of ” double truth,” where the process would take place. In the center was a two-pan scale, a kind of lie detector, in front of it the god Osiris enthroned and, at his side, forty-two deities who constituted the jury.

Egyptian dog Anubis was in charge of checking that the scales were perfectly calibrated and working properly and then proceeded to weigh them. On one plate he would place an ostrich feather, or a statuette of the goddess Maat wearing an ostrich feather on her head (a symbol of truth and justice), on the other plate the heart of the deceased, representing the feelings of the dead person (his goodness or badness). If the heart-the feelings-weighed more than the feather-the truth-the dead man’s soul would be condemned to go among the damned. If, on the other hand, the heart weighed like a feather, the dead person would go to the paradise of the god Osiris, since truth is as light as a feather. 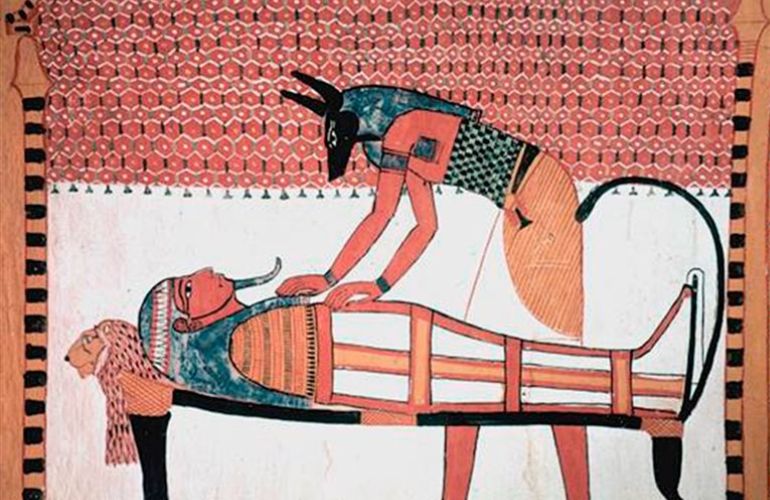 In the cycle of myths related to the death of the god Osiris, Anubis played a pivotal role as he gave him the opportunity to be reborn in the afterlife and become his god. Osiris, in fact, had been barbarically murdered by his brother Seth, who dismembered his body into fourteen pieces and scattered them throughout Egypt. Isis, the wife of the murdered god, managed to find all the pieces of her husband’s body and handed them over to Anubis. The latter with extreme skill reassembled Osiris’ body and wrapped it in bandages, thus creating the first mummy that the history of ancient Egypt remembers.

Statues and paintings of the Egyptian Dog God  Anubis are very often encountered inside the tombs of kings and nobles since, as guardian of the necropolis, he had to defend the tomb from thieves, evildoers, and any demonic presence. A splendid sculpture of Anubis comes from the tomb of Pharaoh Tutankhamun and was placed to guard the case of the canopic jars-the vessels that contained the entrails of the dead in the so-called Treasure Chamber. 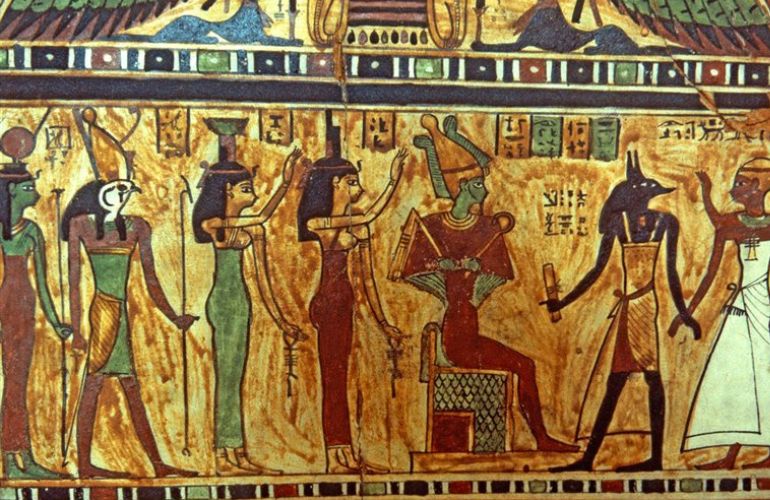 Another type of depiction of an Egyptian god with dog head Anubis that can be encountered inside tombs is that which depicts him in his capacity as a guide for the dead. In these images, the god is depicted holding the hand of the deceased and preceding him on the path through the darkness of death.

It is an emotional image of the deceased being afraid of what he will have to face, but the god Anubis is near him, encouraging him and infusing him with energy by holding him firmly by the hand. Anubis is his guide and protector. 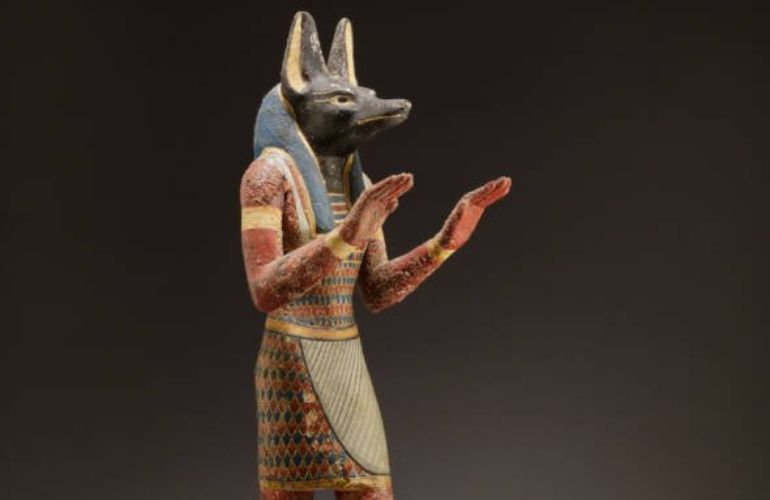 Why use the divine figure of a dog/ jackal to accompany the dead to the afterlife? It must be said that the Greeks and Romans also made this choice: the god Hermes/Mercury made his journey to the underworld accompanied by a dog. This animal was chosen because of his great attachment and devotion to man, because of his highly developed senses and ability to see in night. Who could have been a better guide than he in the darkness of death?